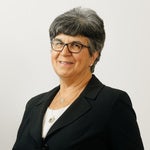 Joanne handles the firm's matters that are assigned to Katherine Taylor as a Howard County Circuit Court Auditor.  Joanne loves traveling, fixing up her old house and spending time with her grown children and grandchildren as well as her grand dogs, one of which, Tucker, she babysits often.

Joanne monitors and reviews all of the Court Auditor cases referred to Taylor Legal.  Having an accounting background aids her mightily because the work involves details about loan terms, interest calculations and expense documentation.  Now that the Howard County Circuit Court has adopted online filing, Joanne has given up trips to the Courthouse in favor of navigation on the web.

Joanne has a son, a daughter, two daughters-in-law, four grandchildren and three grand dogs, all of whom live in the area.  Her late husband was a lawyer who Joanne assisted in his law practice.  Beyond her immediate family, Joanne has a large Italian family consisting of six brothers and sisters and many, many nieces, nephews and cousins.

What You Probably Do Not Know